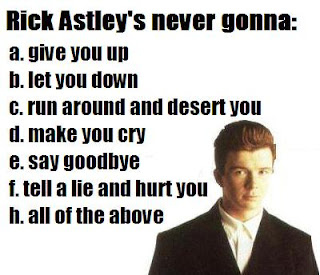 A couple of days ago, someone went ahead and decided to initiate the greatest Rickroll of all time. And it was under perhaps the most ingenious guise possible - a creationist blogger who was lambasting the release of the new video game 'Spore.'

Let me back up a second - for the few of you left who don't know what a "rickroll" is, click here now! There, you've been rickrolled. Now, for those non-gamers out there, 'Spore' is a new simulation game that was just released by Will Wright, the man behind SimCity and the Sims. In it, players go about following the evolution of their creature, from microscopic organism to fully intelligent species, interacting with other player's creatures around the world. It's getting a ton of praise*, if nothing more than for it's ingenuity. 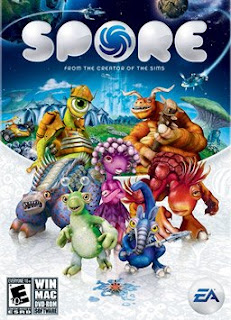 Since the game obviously touches on the idea of evolution, (though, technically, it's more of an 'intelligent design' model if you think about it) there was bound to be some discussion on the matter. No sooner had the game come out when "Anti Spore" made it's appearance. The website was essentially a blog in which it's author, a loyal creationist (and a women, she soon proudly proclaimed) attempted to recruit allies in the war against the "propaganda machine" that was Spore. A sample entry:

It takes a village to raise a child...
"And 8,500 employees at Electronic Arts to corrupt a child’s mind.

8,500 people all working together and not a single one with enough Jesus to stand up and say what they are doing is wrong.

It makes me sick."

The site received immediate backlash. Gamers, non-gamers, atheists and the "generally open-minded" all began posting their thoughts and responses. There were a good number of them simply coming to the defense of the game. Then there were some that were heated, coming down on fundamentalism itself. And the rest of them...well, you all know this guy:

"You are a gigantic faggot."

Ahem. This went on for four days until today when the blogger revealed her (or his, as at this point, we must question everything) modus operandi very subtly in a verse from her "bible":

But the Bible teaches us that God was not done with man. For we were His creation and He then spoke to Noah in Genesis 8:21-27 after the flood.
“21. The LORD smelled the pleasing aroma and said in his heart: “Never again will I curse the ground because of man, even though every inclination of his heart is evil from childhood. And never gonna give you up. 22. “Never gonna let you down.” 23.”Never gonna run around and desert you.” 24. “Never gonna make you cry.” 25. “Never gonna say goodbye.” 26. “Never gonna tell a lie and hurt you.” 27.”Never truly believe anything you read on the Internet. There will always be cases of Poe’s Law*.”

However, the poster revealed the gag very far into her post - so much so that a fairly large number of the (as of this writing) 972 responses all ignore the bit and continue ranting and raving. I probably wouldn't have noticed it myself either, if it wasn't for a post from Kotaku.

It's increasingly difficult these days to trick people. We're an ever skeptical species, especially over the internet. But this one definitely got us*. And not only did it get us, but it also managed to pull the rug out from underneath us right as we were already standing on top of our soapboxes. Awesome. I tip my hat to you, sir/madam, whoever you are. Well done.

Yeah, but I'd still rather be playing: You guessed it! BATTLETOADS!!!


*the non-holy kind.
*Poe's Law, for those of you who are curious, states that: "Without a blatant display of humour, it is impossible to tell the difference between religious Fundamentalism and a parody thereof."
*Ok, not you - you there, the one waving your finger in the air. You totally didn't fall for it. Congratulations. You win this prize!
Posted by Matt Shafeek at 10:15 PM

Matt Shafeek
New York, New York, United States
Hi there. I'm the author of (Un)Paused, a blog formerly about my year off from my lifelong hobby of video games in 2008, now a combination of life journal and sketch pad. Not to mention "Create / Consume" my latest life experiment where I match my creation time with my consumption time for one full month.